The aim of the SONAR study is to decide whether performing ultrasound scans of arteriovenous fistulas early after they have been formed can help identify those fistulas that are not going to mature sufficiently to be used for dialysis.  If we can identify those ‘at-risk’ fistulas, we will run a second study to see if they can be ‘saved’ by ‘balloon angioplasty’ (where any narrowings are stretched using an X-ray approach) or by further surgery. To answer this question, we invited over 300 patients to take part in SONAR and have analysed the data collected. The trial design is summarised below: 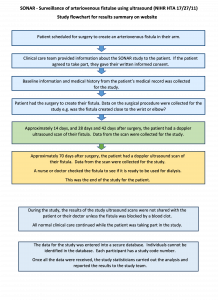 We divided the SONAR fistulas into two groups; ‘wrists’ and ‘elbows’, based on where in the arm they were created.  By looking at the data in these two groups, we were able to design statistical models that predicted which fistulas were unlikely to mature.

We could also correctly predict which fistulas would not be mature at week 10, in about 61% of wrist cases and 67% of elbow cases that were predicted as non-mature.  This is less reliable which is important because for the second study, these are the fistulas we want to be able to identify and then intervene upon.

We found that the volume and speed of blood flowing through the fistulas, measured in the ultrasound scan at 4 weeks after fistula surgery, was strongly associated with fistula non-maturity by week 10 in both wrist and elbow cases. We identified other measurements, such as the diameter of the fistula and the ‘resistance index’ (how freely the blood in the artery can flow through the fistula and back to the heart) were also important predictors for the wrist and elbow, respectively.

Out of the 333 fistulas we studied in the model, about 18% of them were predicted to not mature by 10 weeks. These predictions align well with the low proportion of not mature fistulas by week 10 observed in the data. This is fewer than we expected, because we know from other studies that around 45% of fistulas fail in the first year. We therefore wondered whether following up the fistulas beyond the SONAR 10-week window would give us a more complete picture of fistula failure in the SONAR participants.

We have looked at the SONAR data very thoroughly and shared it with all the doctors, nurses, sonographers and vascular scientists involved.  We also asked a group of independent experts to look at the results, including a kidney patient with experience of having a fistula.

Having thought carefully about what the SONAR data shows, we are going to ask all the patients who took part if we can collect some more information about what happened to their fistulas after the SONAR study finished.  We would like to find out if their fistulas did mature, if they were used for dialysis and whether they needed any further operations or procedures in the 12 months after surgery, and then again after 5 years.  This will be called the SONAR-12M study.

We will use the data from 12 months after surgery to look again at whether the early ultrasound scan data can be used to more reliably predict when a fistula is not going to mature.  This will help us decide whether to carry out the second study, and if so, how many patients we would need to ask to take part.

We are hugely grateful to all the patients who took part in SONAR and hope that they will want to be part of SONAR-12M.

The participant information sheet for SONAR-12M can be found here.